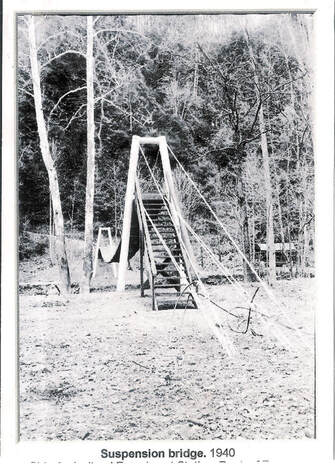 One of the long-time "dream" projects of the Mohican Trails Club is about to become a reality.   The Ohio Department of Natural Resources(ODNR) has funded a project to construct a footbridge across the Clearfork River just below the Gorge Overlook area.   This bridge will replace the iconic "Swinging Bridge" that was washed out during the flood of 1969.

This project has been our club's long term goals list since the clubs beginnings.  But the lack of funds for such a large project always put it on the back burner, even though ODNR fully supported the idea.

So the club kept re-planting the idea at our annual work plan meetings with Park Officials, and we saw the seed of the idea germinate.   The Park Manager suggested we go forward with our proposal to reconstruct the gorge overlook trail, which would provide a link between the Gorge Overlook, the Clearfork Gorge Trail  Campground A if the once a footbridge is constructed.   Kind of a "if you build it, they will come" idea to elevate the funding priority for the footbridge project.

Thanks goes to all the longtime members of the club who kept the footbridge project alive for so many years and to ODNR who took that idea and are making it a reality.

Below is a great article that appeared in the local newspaper.  The piece shares the history of the original bridge and the significance of the new bridge to the Park and its visitors. 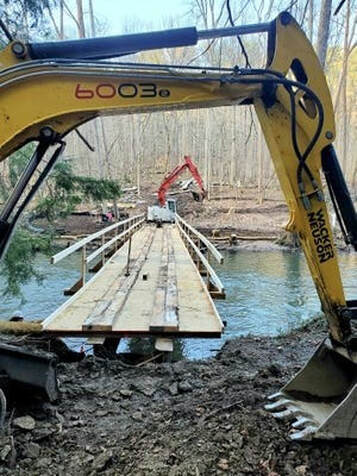 Temporary bridge built for construction
​
Gone for half a century, Mohican footbridge will return
Irv OslinColumnist

The footbridge over Clear Fork in Mohican State Park has been out for more than 50 years. That’s about to change. The Ohio Department of Natural Resources is replacing the cable bridge between the covered bridge and the main campground.

“Construction began in mid-November of 2020 and will continue through winter,” ODNR’s Ted Welsh told me in a recent email. “As long as winter conditions are normal and there are no other unanticipated delays, we expect the project will be complete by spring 2021.”

Welsh is a federal aid coordinator with ODNR Division of Parks and Watercraft. He also serves as coordinator for the cable bridge project.

ODNR has closed the trail at the bridge construction site between the Mohican State Park main and primitive campgrounds.

When completed, the bridge will connect the recently opened Overlook Gorge Trail on the south side of the river to the trial connecting the main and primitive campgrounds on the north side. I mentioned the bridge in a previous column about the Mohican Trails Club restoring a disused Civilian Conservation Corps trail at Clear Fork Gorge Overlook. It’s a loop trail with marked trailheads at either end of the overlook.
​
Click here for a link to that story. 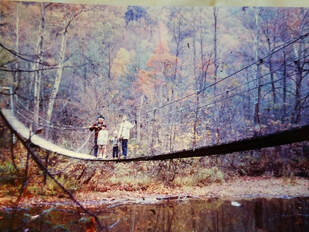 Original "Swinging Bridge" circa 1960's
When trail building and maintenance volunteers formed the Mohican Trails Club in 2003, the footbridge was already on their radar, according to club treasurer Jim South.

“One of the first questions that was raised within the club and from other persons that use the park was, ‘What is the possibility of fixing the swinging bridge at the bottom of the gorge’,” South said in an email. “No one believed there was any possibility. However, as the popularity of hiking and biking in the park increased, ODNR’s support for the park’s trails improved and we started asking this question seriously.”

Restoring the old gorge trail opened up that possibility. The trail was opened to the public in November of 2020.
​
​ 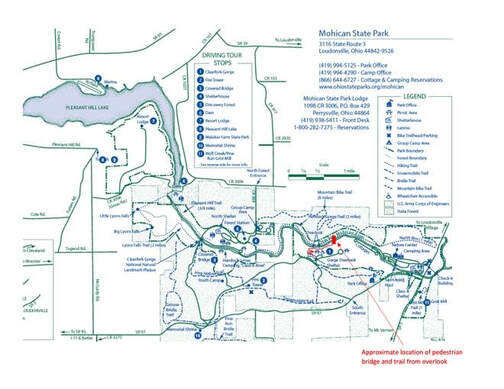 ​Among other things, the cable bridge will enable campers to venture across the river and access the overlook on foot. Once across, they’ll have the option of taking the long, gradual climb to the west or the short steep climb to the east. (The ladder is on the latter.)

It also will open up countless other opportunities for longer hikes in the state park and forest — which comprises more than 5,600 acres. (Add to that the contiguous public lands and you’ve got around 20,000 acres to roam!)

Drawing of Clearfork River Footbridge Structure
Here is a photo of the completed footbridge... 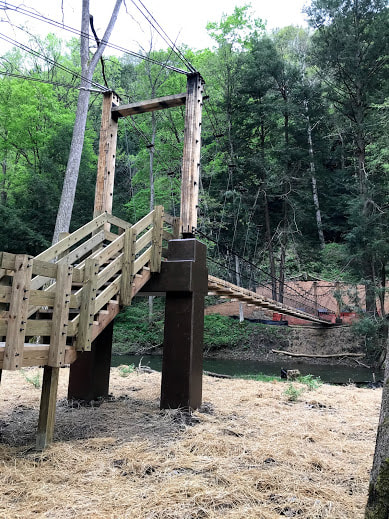