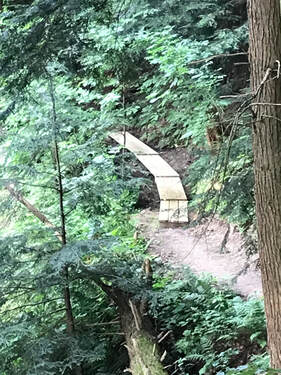 ​One of the missions of the Mohican Trails Club is to re-establish hiking trails in the Park which have fallen into disrepair and become impassible over time.   The most historical of those trails once lost to time and weather is the Mohican Gorge Overlook Trail, which was originally constructed in the 1930's during the Great Depression by the Civilian Conservation Corp.  The Club spent several years re-establishing the original route of the trail, determining how to overcome some of the challenges that it presented on the steep hillsides and then physically completing the work in the age of COVID 19.

The Mohican Trails Club was able to overcome all of the obstacles and in August of 2020, the trail completed and officially opened to the public,  It has been an instant success.

So much thanks must go to the volunteers who made the project happen and the Park Management for their support throughout the effort.

Following is an article which provides additional details about this effort.  Enjoy... 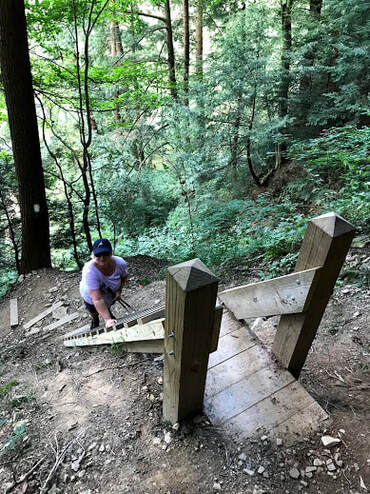 Fitness and hiking enthusiast are beating a path to Mohican State Park’s newest trail. Although the term “newest” might be a misnomer. Much of the Gorge Overlook Trail, which opened in mid-August, was blazed in the 1930s by the Civilian Conservation Corps. Which makes it Mohican’s oldest new trail.  The roughly two-mile loop trail can be accessed from the Clear Fork Gorge Overlook, one of Mohican’s iconic landmarks.

You can thank the Mohican Trails Club for this effort. “The three major trails in the park are heavily used and showing the result of that usage,” club treasurer Jim South said in a recent email. “On weekends it is difficult to find parking at the trailheads. The club had long advocated for more trails in the park and forest. The overlook was a perfect place to start because there are two parking lots and it is away from the other trails.”  Plus there was a desire to preserve some of the history of the trail club’s predecessors — the Civilian Conservation Corps. (CCC workers built the park, reclaiming thousands of acres of rugged and once-beautiful land decimated by irresponsible farming practices.)

In laying out the trail, Mohican Trail Club members tried to follow much of the CCC’s “Nature Trail,” as it was called. The stone foundations of two old CCC shelter houses can be found along the trail.  “The club started trying to locate the original trail around 2015,” South said. “Actual trail building started at the end of 2018.”
​
The trail descends into the gorge from either end of the overlook. On the west end, the descent is gradual. The east end is another story. It’s so steep that, for getting up or down, steps weren’t going to cut it; club volunteers installed a ladder. That’s in addition to steps, some of which originally were built by the CCC.

The work was challenging to say in the least.  “One of our old Facebook postings has a picture of club member Jim Burson, after he slid down the hill on one workday,“ South said. “This was common until we got more of the trail benched.“  For the uninitiated, “benched” means bench-cutting, the practice of leveling trails along hillsides. Otherwise, people would slide off the hillside and you’d end up with a bunch of injured hikers stacked up at the bottom of the gorge.

Speaking of which, hiking the Gorge Overlook Trail is not for lightweights. Signs at the trailheads advise that it’s steep and challenging and should not be attempted by those with physical limitations. Or inadequate footwear. 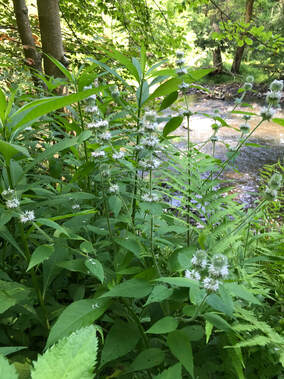 ​The trail is breathtaking — in both senses of the word. It descends down to the south bank of Clear Fork of the Mohican River, then follows the stream along one of its most scenic sections. As you trek along the riverbank, — awed by the wildflowers, towering trees, and stunning rock formations — you realize you’ll eventually have to climb out of there.
​
In addition to adding a new trail to Mohican State Park and preserving CCC history, the Mohican Trails Club had further impetus to build the trail--the Ohio Department of Natural Resources plans to build a cable footbridge across Clear Fork River. Work on the span began in November of 2020. It will be located downstream of where a gas company footbridge once crossed the river.