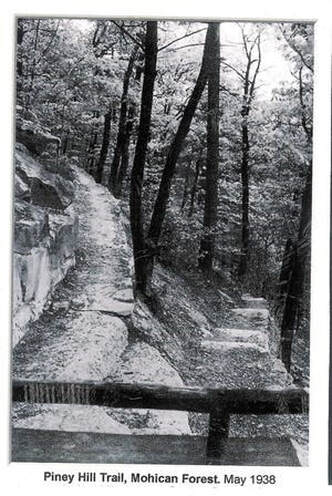 ​One of the missions of the Mohican Trails Club is to re-establish hiking trails in the Park which have fallen into disrepair and become impassible over time.   The  historical Piney Hill Trail was one of those trails once lost to time and weather.  The Piney Hill Trail was originally constructed in the 1930's during the Great Depression by the Civilian Conservation Corp.  The Club spent several years re-establishing the original route of the trail, determining how to overcome some of the challenges that it presented on the steep hillsides and then physically completing the work in the age of COVID 19.

So much thanks must go to the volunteers who made the project happen and the Park Management for their support throughout the effort.  A special thanks to long-time club member Jim Burson for all of his work on researching the historical maps, re-creating the original route that had been obliterated by time and weather and keeping the dream alive of getting this trail back on the map and open for business...

Here is a great article about the trail.   Enjoy...
​
Mohican trails — recreation in both senses of the word
Irv Oslin
Climbed any good trails lately? The recently restored Piney Hill Trail in Mohican State Park offers a challenging workout — and spectacular scenery.

The Civilian Conservation Corps originally blazed the Piney Hill Trail in the 1930s. CCC workers built it — most likely so they could access Clear Fork of the Mohican River from their camp. The camp was located on a hilltop now occupied by the state forestry office.

As I mentioned in my column a few weeks ago, this trail complements the Overlook Gorge Trail on the south side of the river. Both are disused CCC trails recently restored by the Mohican Trails Club. The Overlook Trail officially opened in August 2020.
​Mohican Trails Club Treasurer Jim South tells me that Piney Hill and Shelter House trails on the north side of the river will be combined into a loop trail. It will officially be called the Shelter House Trail. The two-mile loop will connect the two picnic pavilions on top of the hill with the covered bridge and primitive campground below.

The Piney Hill section hasn’t officially opened but hikers are already enjoying it.
​Both trails have been a labor of love for club members. They set their sights on these projects when they formed the club in 2002 to maintain and improve existing trails in the park and forest. (A footnote here — Mohican State Park and Mohican Memorial State Forest are separate-but-connected entities. You can find an explanation on my blog: https://irvoslin.wordpress.com/2012/02/19/you-cant-get-there-from-here-if-you-dont-know-what-here-and-there-are/) 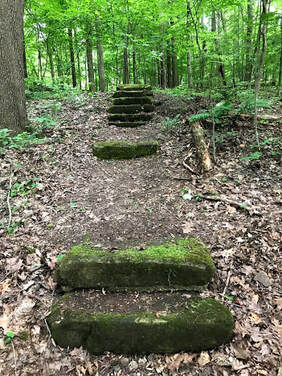 Mohican Trails Club member Jim Burson tells me that it took some historical and archeological digging to pinpoint the original Piney Hill Trail. He used old maps and topo maps to locate trail segments. He also used existing stone steps for reference points, steps originally lugged onto the steep hillside by CCC workers. At one time, there were more steps but they’ve been obliterated by the constantly changing landscape.

The slope is forested with hardwoods, along with hemlocks and other species of pine. Ferns — including evergreen varieties — blanket the forest floor.
​
Club members spent a lot of time bench-cutting the restored trail and adding more stone steps. Burson continues to add a few here and there when time allows. Like the Gorge Overlook Trail, this one is not recommended for the casual hiker and should be avoided when there’s snow or ice on the ground.​The Pine Hill segment closely follows the original but there’s one variation. At the eastern part of the primitive campground — also known Campground B — the trail originally descended into one of the campsites. That trailhead has been moved to the eastern end of the campground. Signage will be posted later.

When all is said and done, there will be trailheads on the hilltop and at either end of the campground below.
​
This will make for another great hike in Mohican. If hikers pause to listen, they just might hear the sound of the CCC boys or trail club volunteers working — or enjoying some free time down by the river. Echoes of the past, present and future.
​