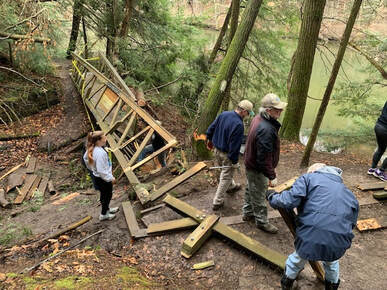 In late March, strong winds and rains resulted in several large trees uprooting and falling on the Lyons Falls bridge, completely demolishing the structure. This is the first footbridge a hiker encounters when hiking from the covered bridge trailhead to Lyons Falls.   The bridge spans a deep drainage and is one of the most popular and heavily used trail by visitors to the Park.  As such,  it was critical that this bridge be reconstructed as quickly as possible.

The Mohican Trails Club accepted the challenge.   The first task was to clear the trees from the bridge and assess the damage.  Once that was done, it was obvious the bridge was a total loss and would require a new structure.   Club members then began the labor intensive process of removing the damaged bridge structure and salvaging the hardware--large bolts and splice plates that could be re-used to re-assemble the new bridge trusses. 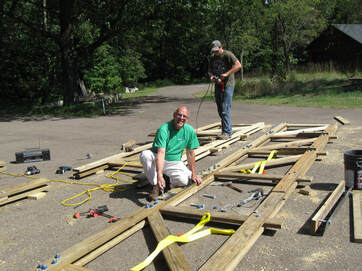 While a crew was dis-assembling and removing the damaged structure, several Club members were reviewing old bridge construction plans.  Using the plans, a materials list was created and an order for the treated lumber, hardware and concrete was completed.   By early April, the lumber was delivered to the Park Maintenance yard and an inventory was completed to ensure everything was on site to complete the project.   Club members began setting up work stations to measure, check and then cut the pieces needed to assemble the trusses. 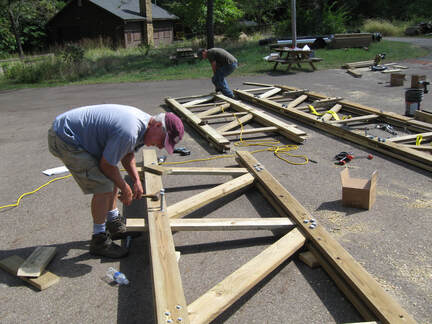 ​Other Club members began the intricate assembly process, which involves laying out the truss parts, temporary attachment with screws and supports and then the final assembly.  For a forty foot bridge like this one, four trusses are built and then transported to the site.  Once on site, each truss is carried by Club members to the bridge location.  It has been estimated that each truss weighs between 600-800 pounds. 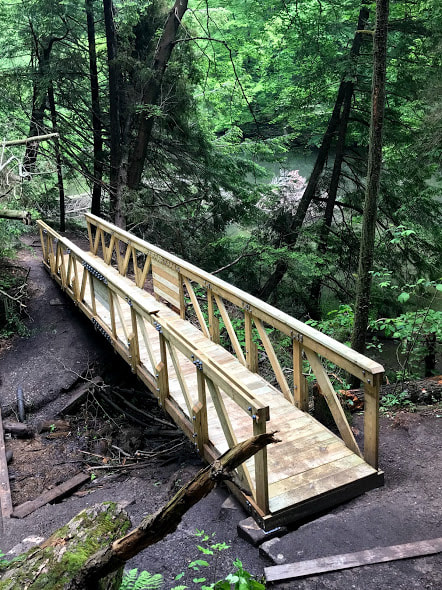 Then, all the connecting bolts and splice plates are installed and the trusses moved into the final position on the concrete foundations.   The final steps in the process are the installation of the floor boards and top rails.

On June 2nd, the bridge was completed and opened to hikers....

Kudos to all of the Club members who worked so hard to expedite the reconstruction of this bridge structure on the most popular hiking trail in the Park.